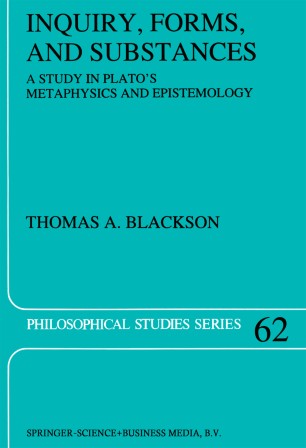 A Study in Plato’s Metaphysics and Epistemology

i. Introductory remarks 1 Plato, but not Socrates, concluded that the Forms are substances. Whether the Forms are substances is not an issue that Socrates had in mind. He did not deny it, but neither did he affirm it. If Socrates were asked a series of questions designed to determine whether he believed that the Forms are substances, he would admit that he had no opinion about this philosophical issue. Unlike Plato, Socrates was not a metaphysician. The same, of course, would not have always been true of Plato. Unlike Socrates, he was a metaphysician. At some point in his career, and at least by the time of the Phaedo and the Republic, Plato did what Socrates never thought to do. Plato considered the question and concluded that the Forms are substances. Although this development occurred more than two thousand years ago, time has not eclipsed its importance. It is one of the most seminal events in the history of the philosophy. With his defense of Socrates's method of intellectual inquiry, and the development of his Theory of Forms, Plato caused a now familiar cluster of metaphysical and epistemological issues to become central to philosophy.