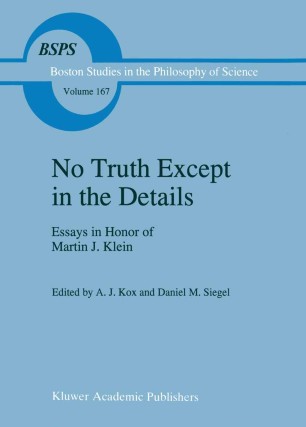 No Truth Except in the Details

Part of the Boston Studies in the Philosophy of Science book series (BSPS, volume 167)

Beginning with a couple of essays dealing with the experimental and mathematical foundations of physics in the work of Henry Cavendish and Joseph Fourier, the volume goes on to consider the broad areas of investigation that constituted the central foci of the development of the physics discipline in the nineteenth century: electricity and magnetism, including especially the work of Michael Faraday, William Thomson, and James Clerk Maxwell; and thermodynamics and matter theory, including the theoretical work and legacy of Josiah Willard Gibbs, some experimental work relating to thermodynamics and kinetic theory of Heinrich Hertz, and the work of Felix Seyler-Hoppe on hemoglobin in the neighboring field of biophysics/biochemistry. Moving on to the beginning of the twentieth century, a set of three articles on Albert Einstein deal with his early career and various influences on his work. Finally, a set of historiographical issues important for the history of physics are discussed, and the chronological conclusion of the volume is an article on the Solvay Conference of 1933.
For physicists interested in the history of their discipline, historians and philosophers of science, and graduate students in these and related disciplines.