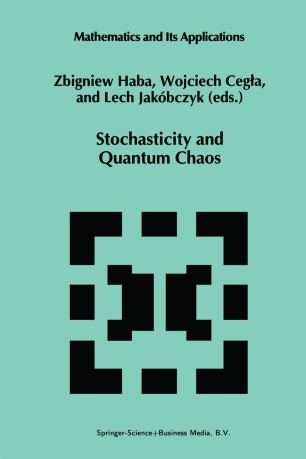 Part of the Mathematics and Its Applications book series (MAIA, volume 317)

These are the proceedings of the Third Max Born Symposium which took place at SobOtka Castle in September 1993. The Symposium is organized annually by the Institute of Theoretical Physics of the University of Wroclaw. Max Born was a student and later on an assistant at the University of Wroclaw (Wroclaw belonged to Germany at this time and was called Breslau). The topic of the Max Born Sympo­ sium varies each year reflecting the developement of theoretical physics. The subject of this Symposium "Stochasticity and quantum chaos" may well be considered as a continuation of the research interest of Max Born. Recall that Born treats his "Lectures on the mechanics of the atom" (published in 1925) as a nrst volume of a complete monograph (supposedly to be written by another person). His lectures concern the quantum mechanics of integrable systems. The quantum mechanics of non-integrable systems was the subject of the Third Max Born Symposium. It is known that classical non-integrable Hamiltonian systems show a chaotic behaviour. On the other hand quantum systems bounded in space are quasiperi­ odic. We believe that quantum systems have a reasonable classical limit. It is not clear how to reconcile the seemingly regular behaviour of quantum systems with the possible chaotic properties of their classical counterparts. The quantum proper­ ties of classically chaotic systems constitute the main subject of these Proceedings. Other topics discussed are: the quantum mechanics of dissipative systems, quantum measurement theory, the role of noise in classical and quantum systems.