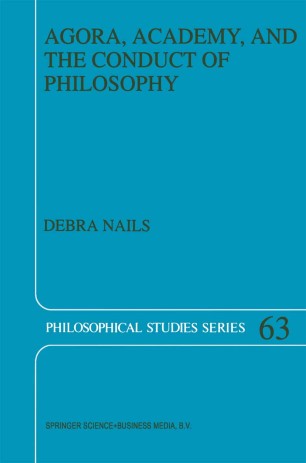 Agora, Academy, and the Conduct of Philosophy

Agora, Academy, and the Conduct of Philosophy offers extremely careful and detailed criticisms of some of the most important assumptions scholars have brought to bear in beginning the process of (Platonic) interpretation. It goes on to offer a new way to group the dialogues, based on important facts in the lives and philosophical practices of Socrates - the main speaker in most of Plato's dialogues - and of Plato himself. Both sides of Debra Nails's arguments deserve close attention: the negative side, which exposes a great deal of diversity in a field that often claims to have achieved a consensus; and the positive side, which insists that we must attend to what we know of these philosophers' lives and practices, if we are to make a serious attempt to understand why Plato wrote the way he did, and why his writings seem to depict different philosophies and even different approaches to philosophizing.
From the Preface by Nicholas D. Smith.

` Nails offers us a challenging and useful book.'
Anciet Philosophy 19 (1999)