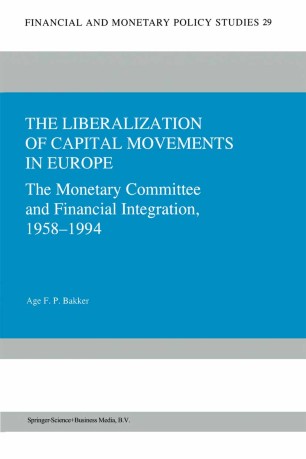 The Liberalization of Capital Movements in Europe

The Monetary Committee and Financial Integration 1958–1994

The member states are facing the choice between either reaping the benefits of increasing integration in a certain area - in this case the capital markets - attended by a significant reduction in national powers of autonomous decision-making and independence, or retaining this national independence enabling them to pursue their own policy objectives with the aid of instruments selected at their discretion. To this question, there is no generally valid answer. The solution is determined by the weight assigned to the benefits, on the one hand, and that assigned to the reduction in national sovereignty, on the other. This, however, is a subjective matter, which is assessed differently in the various countries. OnnoRuding, 1969 1. 1 CAPITAL LffiERALIZATION AND MONETARY UNIFICATION In the 1980s Europe made a leap forward towards the liberalization of capital movements. EEC directives were accepted by all member states obliging them to abolish all remaining exchange controls. This common objective of freedom of capital movements has been consolidated in the Treaty on European Union. Nowadays virtually all restrictions have been lifted. This stands in striking contrast to the state of affairs only a decade ago, when many countries still operated a tight regime. Although the Treaty of Rome provided for the freedom of capital movements, this objective was circumscribed by the clause that such liberalization should only be carried through to the extent necessary to ensure the proper functioning of the Common Market.