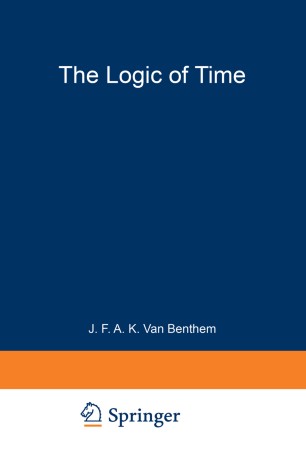 That philosophical themes could be studied in an exact manner by logical meanS was a delightful discovery to make. Until then, the only outlet for a philosophical interest known to me was the production of poetry or essays. These means of expression remain inconclusive, however, with a tendency towards profuseness. The logical discipline provides so me intellectual backbone, without excluding the literary modes. A master's thesis by Erik Krabbe introduced me to the subject of tense logic. The doctoral dissertation of Paul N eedham awaked me (as so many others) from my dogmatic slumbers concerning the latter's mono­ poly on the logical study of Time. Finally, a set of lecture notes by Frank Veltman showed me how classical model theory is just as relevant to that study as more exotic intensional techniques. Of the authors whose work inspired me most, I would mention Arthur Prior, for his irresistible blend of logic and philosophy, Krister Segerberg, for his technical opening up of a systematic theory, and Hans Kamp, for his mastery of all these things at once. Many colleagues have made helpful comments on the two previous versions of this text. I would like to thank especially my students Ed Brinksma, Jan van Eyck and Wilfried Meyer-Viol for their logical and cultural criticism. The drawings were contributed by the versatile Bauke Mulder. Finally, Professor H intikka's kind appreciation provided the stimulus to write this book.

From reviews of the first edition:
`Overall this is an admirable work. I believe it will change and enrich the field.'
Steven Kuhn, Journal of Symbolic Logic, 52 (3) (1987)
`...the book...will be most useful to anyone, newcomer or expert, with an interest in the logic of time.'
John Burgess, Journal of Philosophical Logic, 13 (3) (1984)