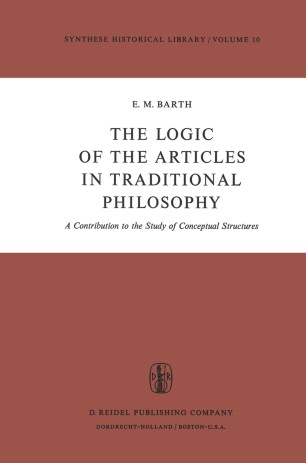 The Logic of the Articles in Traditional Philosophy

A Contribution to the Study of Conceptual Structures

When the original Dutch version of this book was presented in 1971 to the University of Leiden as a thesis for the Doctorate in philosophy, I was prevented by the academic mores of that university from expressing my sincere thanks to three members of the Philosophical Faculty for their support of and interest in my pursuits. I take the liberty of doing so now, two and a half years later. First and foremost I want to thank Professor G. Nuchelmans warmly for his expert guidance of my research. A number of my most im­ portant sources were brought to my attention by him. During the whole process of composing this book his criticism and encouragement were carried out in a truly academic spirit. He thereby provided working conditions that are a sine qua non for every author who is attempting to approach controversial matters in a scientific manner, conditions which, however, were not easily available at that time. In a later phase I also came into contact with Professors L. M. de Rijk and J. B. Ubbink, with both of whom I had highly stimulating discussions and exchanges of ideas. The present edition contains some entirely new sections, viz. 1-9, IV-29, V-9, V-20, VII-14 (iii), (iv), VII-17 (i), VIII-22, IX-17, IX-19, X-9 and XI-8. Section X-9 was inspired by a remark made by Professor A.

`...one of the most interesting contributions to the history of logic available today, boasting a rare combination of solid scholarship and sharp logical understanding.'
Journal of the History of Philosophy
`...a highly original work of major importance not only in formal logic but also in general philosophy ... Dr. Barth's work is based on an impressively sensitive command of a vast array of ancient, medieval, Renaissance, and more recent formal logic, down to the present day, and has a range of implications far beyond what can be explained in a brief review. ... the mastery so brilliantly in evidence in Dr. Barth's work is still rare elsewhere - a fact shich makes her work all the more welcome.'
The Modern Schoolman
`...profound and of an enormous intellectual richness... extremely rich as to analysis, critical linguistics, that clarifies the logical foundations of philosophy. The author demonstrates great knowledge of logic, of philosophy, and of the history of both, ...this is a work of capital importance due to its content as well as to the method it follows, thus drawing large horizons for future research.'
Estudios Filosoficos (Spain)