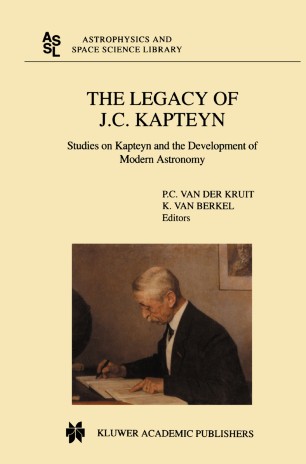 The Legacy of J.C. Kapteyn

Studies on Kapteyn and the Development of Modern Astronomy

Jacobus Cornelius Kapteyn (1851-1922) of the University of Groningen was one of the foremost astronomers of his time, resulting in a leading role internationally of Dutch astronomy throughout the twentieth century. This volume, which is the proceedings of a special `legacy' symposium at the celebration of the 385th anniversary of the University of Groningen, addresses Kapteyn's influence on the development of modern astronomy through studies of his pioneering work on statistical astronomy and the Structure of the Sidereal System, and his leadership in establishing international collaborations, in particular the Plan of Selected Areas. In addition to historical studies related to Kapteyn's person, work, international collaborations and organisational efforts, the volume discusses the influence of Kapteyn on the internationalisation of astronomy and on contemporary astronomy. It also provides an inventory of Kapteyn's correspondence.