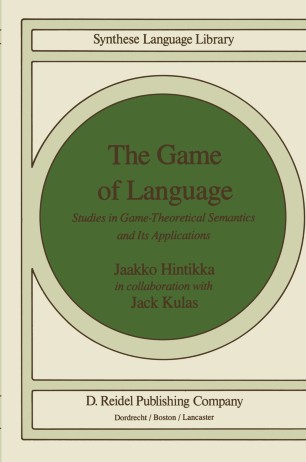 The Game of Language

Studies in Game-Theoretical Semantics and Its Applications

Since the first chapter of this book presents an intro­ duction to the present state of game-theoretical semantics (GTS), there is no point in giving a briefer survey here. Instead, it may be helpful to indicate what this volume attempts to do. The first chapter gives a short intro­ duction to GTS and a survey of what is has accomplished. Chapter 2 puts the enterprise of GTS into new philo­ sophical perspective by relating its basic ideas to Kant's phi losophy of mathematics, space, and time. Chapters 3-6 are samples of GTS's accomplishments in understanding different kinds of semantical phenomena, mostly in natural languages. Beyond presenting results, some of these chapters also have other aims. Chapter 3 relates GTS to an interesting line of logical and foundational studies - the so-called functional interpretations - while chapter 4 leads to certain important methodological theses. Chapter 7 marks an application of GTS in a more philo­ sophical direction by criticizing the Frege-Russell thesis that words like "is" are multiply ambiguous. This leads in turn to a criticism of recent logical languages (logical notation), which since Frege have been based on the ambi­ guity thesis, and also to certain methodological sug­ gestions. In chapter 8, GTS is shown to have important implications for our understanding of Aristotle's doctrine of categories, while chapter 9 continues my earlier criticism of Chomsky's generative approach to linguistic theorizing.