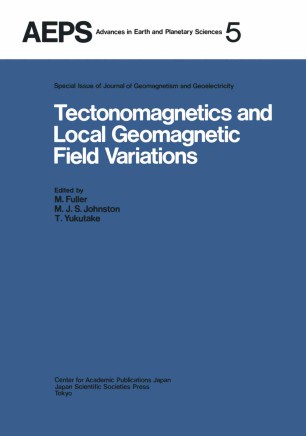 Part of the Advances in Earth and Planetary Sciences book series (AEPS, volume 5)

Physical and chemical studies of the earth and planets along with their sur­ roundings are now developing very rapidly. As these studies are of essentially international character, many international conferences, symposia, seminars and workshops are held every year. To publish proceedings of these meetings is of course important for tracing development of various disciplines of earth and plane­ tary sciences though publishing is fast getting to be an expensive business. It is my pleasure to learn that the Center for Academic Publications Japan and the Japan Scientific Societies Press have agreed to undertake the publication of a series "Advances in Earth and Planetary Sciences" which should certainly become an important medium for conveying achievements of various meetings to the aca­ demic as well as non-academic scientific communities. It is planned to publish the series mostly on the basis of proceedings that appear in the Journal of Geomagnetism and Geoelectricity edited by the Society of Terrestrial Magnetism and Electricity of Japan, the Journal of Physics of the Earth by the Seismological Society of Japan and the Volcanological Society of Japan, and the Geochemical Journal by the Geochemical Society of Japan, although occasional volumes of the series will include independent proceedings. Selection of meetings, of which the proceedings will be included in the series, will be made by the Editorial Committee for which I have the honour to work as the General Editor.