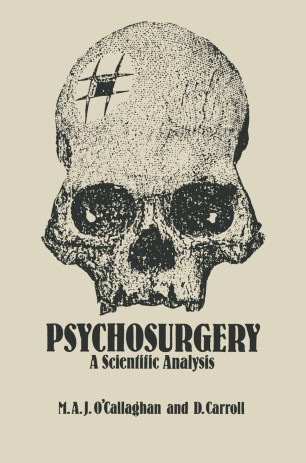 Of all the therapies that comprise psychiatric practice, the use of brain surgery to modify behaviour is the most contentious. That such behavioural neuro­ surgery, or psychosurgery, provokes opposition is far from surprising. The paramount status of the brain seems to belie mechanical intervention. The irreversible nature of the intervention seems to aggravate the outrage. Thus, opponents of the practice contend that psychosurgical procedures constitute a grievous assault on the integrity of the personality. Its proponents, on the other hand, confidently testify that it is a valid and efficacious form of treat­ ment for many seemingly intractable psychiatric disorders. Argument and counterargument have pursued the practice since its initial upsurge in the 1940s, although the decline in its popularity in the 1960s occasioned a tem­ porary cease-fire. However, the recent resurgence of psychosurgery has ensured that it is once again a matter of controversy. In the United Kingdom the characteristically subdued tenor of the debate frequently obscures the popularity of the practice and the commitment of its opposition. A recent application by the Royal College of Psychiatrists to the Medical Research Council for funds to mount a large controlled trial of psychosurgical procedures was turned down. Several opposition lobbyists might claim some credit for the proposal's lack of success. The Schizophrenia Association of Great Bri tain clearly and publicly expressed their disapproval of the trial. The Patient's Protection Law Committee presented Parliament with a petition condemning the Royal College's submission.