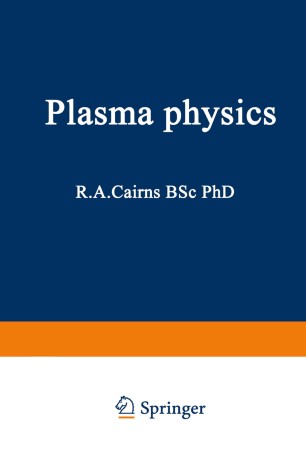 This book is intended as an introduction to plasma physics at a level suitable for advanced undergraduates or beginning postgraduate students in physics, applied mathematics or astrophysics. The main prerequisite is a knowledge of electromagnetism and of the associated mathematics of vector calculus. SI units are used throughout. There is still a tendency amongst some plasma physics researchers to· cling to C.g.S. units, but it is the author's view that universal adoption of SI units, which have been the internationally agreed standard since 1960, is to be encouraged. After a short introductory chapter, the basic properties of a plasma con­ cerning particle orbits, fluid theory, Coulomb collisions and waves are set out in Chapters 2-5, with illustrations drawn from problems in nuclear fusion research and space physics. The emphasis is on the essential physics involved and (he theoretical and mathematical approach has been kept as simple and intuitive as possible. An attempt has been made to draw attention to areas of current research and to present plasma physics as a developing subject with many areas ofuncertainty, and not as something to be set forth on 'tablets of stone'.