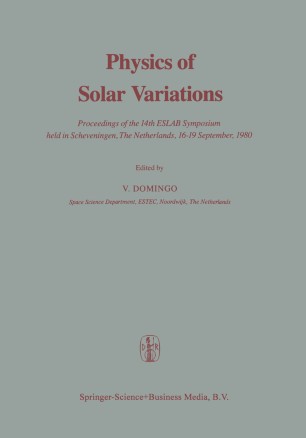 Proceedings of the 14th ESLAB Symposium held in Scheveningen, The Netherlands, 16–19 September, 1980

V. DOMINGO Space Science Department, ESTEC, Noordwijk, The Netherlands The XIVth ESLAB Symposium on 'Physics of Solar Variations' was held in Scheveningen (The Netherlands) on 16-19 September, 1980. The objective of the symposium was to discuss from an interdisciplinary point of view the different types of changing phenomena that occur in the Sun and the effects that such changes may have on the Earth environment with the aim that a global look at the varying phenomena may improve the understanding of the underlying physical processes. Solar physicists of different background, investigators in solar radiometry and atmospheric scientists gathered to review the progress that has been made in the study of the different areas of solar variations. The proceedings of this symposium constitute an up-to-date collection of information on the variations of the Sun. The first and largest section of the proceedings is devoted to the physics of the Sun. An overview of how the observed variations contribute to the development of the theory of the solar structure is followed by several papers on recent results on the study of solar oscillations, a unique probe of Sun's interior. Several papers then summarise the theoretical and experimental efforts in the study of the solar magnetic cycle and its consequences. Finally the expansion of the corona with the formation of the solar wind and some characteristics of solar wind variations are described.