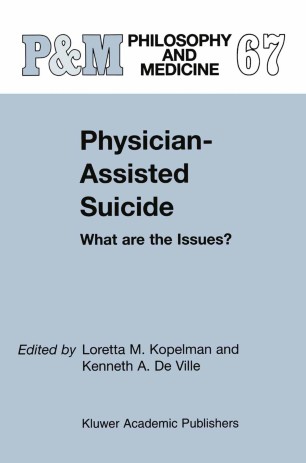 Physician-Assisted Suicide: What are the Issues?

Part of the Philosophy and Medicine book series (PHME, volume 67)

Physician-Assisted Suicide: What are the Issues? offers a detailed discussion of recent supreme court rulings that have had an impact on the contemporary debate in the United States and elsewhere over physician-assisted suicide. Two rulings by the U.S. Supreme Court have altered the contemporary debate on physician-assisted suicide: Washington v. Glucksberg (1997) and Vacco v. Quill (1997). In these cases, the Supreme Court ruled that state laws could prohibit assisted suicide and, therefore, physician-assisted suicide. These rulings mark the apex of over two decades of unprecedented litigation regarding end-of-life care and signal the beginning of a new clinical, ethical, and legal debate over the extent of an individual's rights to control the timing, manner, and means of his/her death.
The debate over suicide and assisting suicide is ancient and contentious and intertwined with questions about the permissibility of voluntary active euthanasia or mercy killing. Responses to these issues can be divided into those who defend physician-assisted suicide and many of these other activities and those who object. But those who object may do so on principled grounds in that they regard these activities as wrong in all cases, or non-principled, in that they believe there are more prudent, less disruptive or more efficient policies. The authors in this book sort out these responses and look at the assumptions underlying them. Several of these authors give startling new interpretations that a culture gap, deeper and wider than that in the abortion debate, exists.