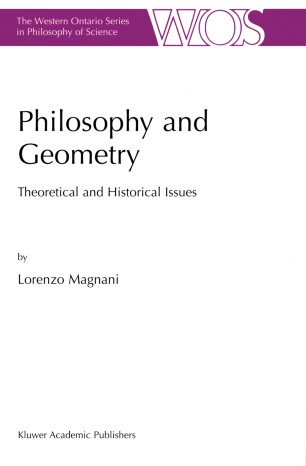 Part of the The Western Ontario Series in Philosophy of Science book series (WONS, volume 66)

Philosophers have studied geometry since ancient times. Geometrical knowledge has often played the role of a laboratory for the philosopher's conceptual experiments dedicated to the ideation of powerful theories of knowledge. Lorenzo Magnani's new book Philosophy and Geometry illustrates the rich intrigue of this fascinating story of human knowledge, providing a new analysis of the ideas of many scholars (including Plato, Proclus, Kant, and Poincaré), and discussing conventionalist and neopositivist perspectives and the problem of the origins of geometry. The book also ties together the concerns of philosophers of science and cognitive scientists, showing, for example, the connections between geometrical reasoning and cognition as well as the results of recent logical and computational models of geometrical reasoning. All the topics are dealt with using a novel combination of both historical and contemporary perspectives. Philosophy and Geometry is a valuable contribution to the renaissance of research in the field.