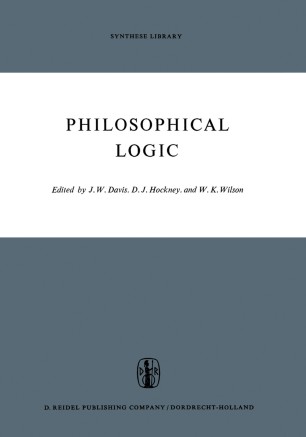 The purpose of this brief introduction is to describe the origin of the papers here presented and to acknowledge the help of some of the many individuals who were involved in the preparation of this volume. Of the eighteen papers, nine stem from the annual fall colloquium of the Depart­ ment of Philosophy at the University of Western Ontario held in London, Ontario from November 10 to November 12, 1967. The colloquium was entitled 'Philosophical Logic'. After some discussion, the editors decided to retain that title for this volume. Von Wright's paper 'On the Logic and Ontology of Norms' is printed here after some revision. A. R. Anderson commented on the paper at the colloquium, but his comments here are based upon the revised version of the von Wright paper. The chairman of the session at which von Wright's paper was read and discussed was T. A. Goudge. Aqvist's paper 'Scattered Topics in Interrogative Logic', and Belnap's comments, 'Aqvist's Cor­ rections-Accumulating Question-Sequences', are printed as delivered. The chairman of the Aqvist-Belnap session was R. E. Butts. Wilfrid Sellars' paper 'Some Problems about Belief' is printed as delivered at the col­ loquium, but 'Quantifiers, Beliefs, and Sellars' by Ernest Sosa is a revision of his comments at the colloquium. That session was chaired by G. D. W. Berry. Ackermann's paper 'Some Problems oflnductive Logic', as well as Skyrms' comments, are printed as delivered.