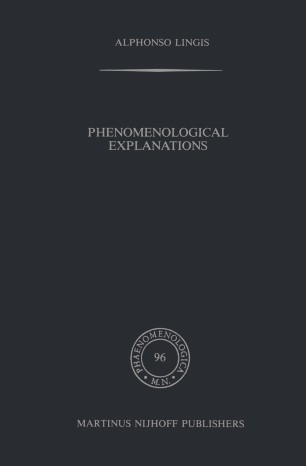 The intentional analysis devised by phenomenology was first used to explain the meaningfulness of expressions; it aimed at exhibiting the original primary substrates that expressions refer to, and at exhibiting the subjective acts that make signs expressive. The explanation of predicative expressions was then extended to the antecedent layer of prepredicative, perceptual experiences, explaining these by locating, with peculiar kinds of immanent intuitions, the original sensile data which evidence the bodily presence of the real - and by reactivating the informin- formulating, interpreting and the informing-forming subjective acts that make of the sensile data, or material, perceived things. Intentional analysis explains by decomposing the derivate references back to the original references, and by leading the mind's intentions back to the givens they refer to. Can this kind of explanation be extended? The investigations of this book have taken this question in different directions. Can phenomenological explanation be extended to exhibit not only the act-character of the mind, but its substance, its affective materiality, its locomotion, its impressed haecceity, in short, its corporeality (Chapter I)? Shall not the explanation explain that if the terra firma of being, in the maximum proximity where distance no longer introduces indeterminability, is never reached, this is not because of the defects and the finitude of our mind, but because being itself is not there as the answer, positive and affirmative - being itself is in the interrogative mood (Chapter II)? If the given being itself is in the x Preface