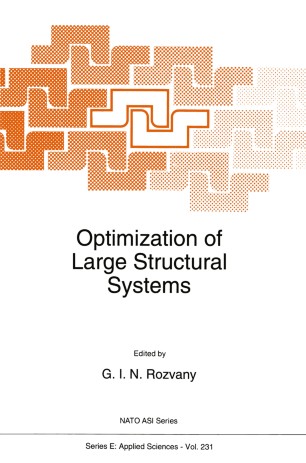 G.I.N. Rozvany ASI Director, Professor of Structural Design, FB 10, Essen University, Essen, Germany Structural optimization deals with the optimal design of all systems that consist, at least partially, of solids and are subject to stresses and deformations. This inte­ grated discipline plays an increasingly important role in all branches of technology, including aerospace, structural, mechanical, civil and chemical engineering as well as energy generation and building technology. In fact, the design of most man­ made objects, ranging from space-ships and long-span bridges to tennis rackets and artificial organs, can be improved considerably if human intuition is enhanced by means of computer-aided, systematic decisions. In analysing highly complex structural systems in practice, discretization is un­ avoidable because closed-form analytical solutions are only available for relatively simple, idealized problems. To keep discretization errors to a minimum, it is de­ sirable to use a relatively large number of elements. Modern computer technology enables us to analyse systems with many thousand degrees of freedom. In the optimization of structural systems, however, most currently available methods are restricted to at most a few hundred variables or a few hundred active constraints.