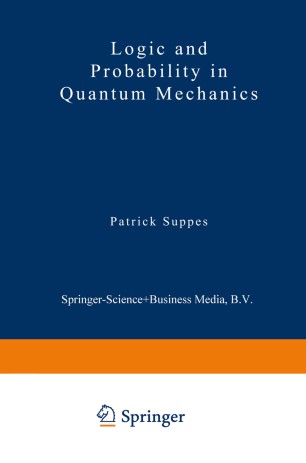 Logic and Probability in Quantum Mechanics

During the academic years 1972-1973 and 1973-1974, an intensive sem­ inar on the foundations of quantum mechanics met at Stanford on a regular basis. The extensive exploration of ideas in the seminar led to the org~ization of a double issue of Synthese concerned with the foundations of quantum mechanics, especially with the role of logic and probability in quantum meChanics. About half of the articles in the volume grew out of this seminar. The remaining articles have been so­ licited explicitly from individuals who are actively working in the foun­ dations of quantum mechanics. Seventeen of the twenty-one articles appeared in Volume 29 of Syn­ these. Four additional articles and a bibliography on -the history and philosophy of quantum mechanics have been added to the present volume. In particular, the articles by Bub, Demopoulos, and Lande, as well as the second article by Zanotti and myself, appear for the first time in the present volume. In preparing the articles for publication I am much indebted to Mrs. Lillian O'Toole, Mrs. Dianne Kanerva, and Mrs. Marguerite Shaw, for their extensive assistance.