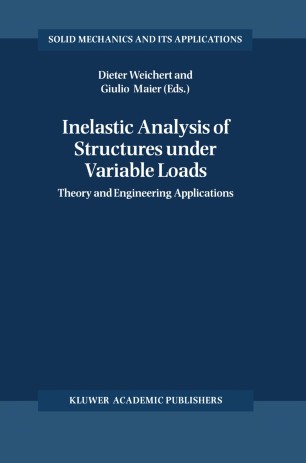 Part of the Solid Mechanics and Its Applications book series (SMIA, volume 83)

The question whether a structure or a machine component can carry the applied loads, and with which margin of safety, or whether it will become unserviceable due to collapse or excessive inelastic deformations, has always been a major concern for civil and mechanical engineers. The development of methods to answer this technologically crucial question without analysing the evolution of the system under varying loads, has a long tradition that can be traced back even to the times of emerging mechanical sciences in the early 17th century. However, the scientific foundations of the theories underlying these methods, nowadays frequently called "direct", were established sporadically in the Thirties of the 20th century and systematically and rigorously in the Fifties. Further motivations for the development of direct analysis techniques in applied mechanics of solids and structures arise from the circumstance that in many engineering situations the external actions fluctuate according to time histories not a priori known except for some essential features, e.g. variation intervals. In such situations the critical events (or "limit states") to consider, besides plastic collapse, are incremental collapse (or "ratchetting") and alternating plastic yielding, namely lack of "shakedown". Non evolutionary, direct methods for ultimate limit state analysis of structures subjected to variably-repeated external actions are the objectives of most papers collected in this book, which also contains a few contributions on related topics.