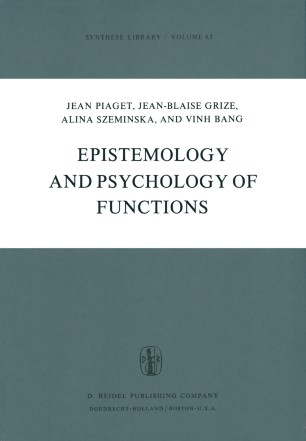 Epistemology and Psychology of Functions

Years ago, prompted by Grize, Apostel and Papert, we undertook the study of functions, but until now we did not properly understand the relations between functions and operations, and their increasing interactions at the level of 'constituted functions'. By contrast, certain recent studies on 'constitutive functions', or preoperatory functional schemes, have convinced us of the existence of a sort of logic of functions (springing from the schemes of actions) which is prior to the logic of operations (drawn from the general and reversible coordinations between actions). This preoperatory 'logic' accounts for the very general, and until now unexplained, primacy of order relations between 4 and 7 years of age, which is natural since functions are ordered dependences and result from oriented 'applications'. And while this 'logic' ends up in a positive manner in formalizable structures, it has gaps or limitations. Psychologically, we are interested in understanding the system­ atic errors due to this primacy of order, such ·as the undifferentiation of 'longer' and 'farther', or the non-conservations caused by ordinal estimations (of levels, etc. ), as opposed to extensive or metric evaluations. In a sense which is psychologically very real, this preoperatory logic of constitutive functions represents only the first half of operatory logic, if this can be said, and it is reversibility which allows the construction of the other half by completing the initial one-way structures.