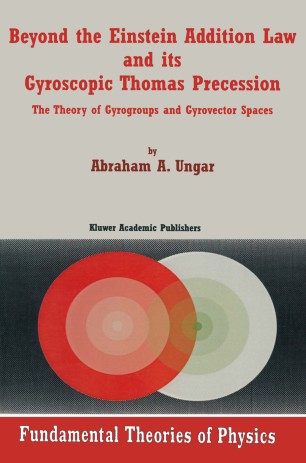 Beyond the Einstein Addition Law and its Gyroscopic Thomas Precession

"I cannot define coincidence [in mathematics]. But 1 shall argue that coincidence can always be elevated or organized into a superstructure which perfonns a unification along the coincidental elements. The existence of a coincidence is strong evidence for the existence of a covering theory. " -Philip 1. Davis [Dav81] Alluding to the Thomas gyration, this book presents the Theory of gy­ rogroups and gyrovector spaces, taking the reader to the immensity of hyper­ bolic geometry that lies beyond the Einstein special theory of relativity. Soon after its introduction by Einstein in 1905 [Ein05], special relativity theory (as named by Einstein ten years later) became overshadowed by the ap­ pearance of general relativity. Subsequently, the exposition of special relativity followed the lines laid down by Minkowski, in which the role of hyperbolic ge­ ometry is not emphasized. This can doubtlessly be explained by the strangeness and unfamiliarity of hyperbolic geometry [Bar98]. The aim of this book is to reverse the trend of neglecting the role of hy­ perbolic geometry in the special theory of relativity, initiated by Minkowski, by emphasizing the central role that hyperbolic geometry plays in the theory.