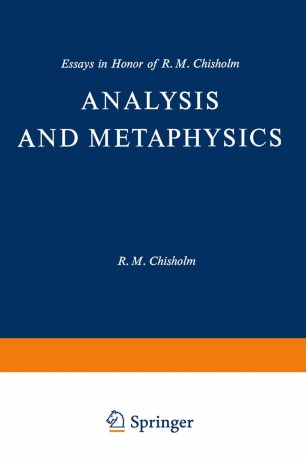 AND BIOGRAPHICAL SKETCH This collection of essays in honor of Roderick M. Chisholm is the work of his former students. The book was conceived and the original con­ tributors invited by Richard Taylor. We restricted the contributors to former students of Chisholm as a special tribute to his acknowledged as a teacher of philosophy. The profundity of his contributions to genius epistemology and metaphysics are acknowledged throughout the phil­ osophical world. Those who have been present at his lectures and semi­ nars, who have been incited to philosophical cerebration by the clarity and precision of his exposition, know that his impact on contemporary philosophy far exceeds the influence of the written word. It is, we think, appropriate that his students should reserve for themselves the privilege of honoring Chisholm in this way as his 60th birthday draws near. The tribute paid to Chisholm in Taylor's essay conveys a personal impression. I shall, consequently, refrain from personal reminiscence here, and instead, mention some of the highlights of an illustrious life. Chisholm was born on November 27, 1916 in North Attleboro, Massachu­ setts. He married Eleanor F. Parker in 1943 and raised three children with her. He received an A. B. from Brown in 1938, a Ph. D. from Harvard in 1942, and served in the U. S. Army from 1942 to 1946.