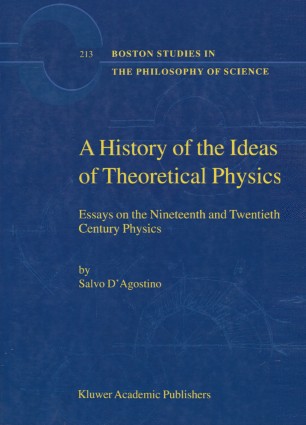 A History of the Ideas of Theoretical Physics

Essays on the Nineteenth and Twentieth Century Physics

Part of the Boston Studies in the Philosophy of Science book series (BSPS, volume 213)

This book presents a perspective on the history of theoretical physics over the past two hundreds years. It comprises essays on the history of pre-Maxwellian electrodynamics, of Maxwell's and Hertz's field theories, and of the present century's relativity and quantum physics. A common thread across the essays is the search for and the exploration of themes that influenced significant con­ ceptual changes in the great movement of ideas and experiments which heralded the emergence of theoretical physics (hereafter: TP). The fun. damental change involved the recognition of the scien­ tific validity of theoretical physics. In the second half of the nine­ teenth century, it was not easy for many physicists to understand the nature and scope of theoretical physics and of its adept, the theoreti­ cal physicist. A physicist like Ludwig Boltzmann, one of the eminent contributors to the new discipline, confessed in 1895 that, "even the formulation of this concept [of a theoretical physicist] is not entirely without difficulty". 1 Although science had always been divided into theory and experiment, it was only in physics that theoretical work developed into a major research and teaching specialty in its own right. 2 It is true that theoretical physics was mainly a creation of tum­ of-the century German physics, where it received full institutional recognition, but it is also undeniable that outstanding physicists in other European countries, namely, Ampere, Fourier, and Maxwell, also had an important part in its creation.