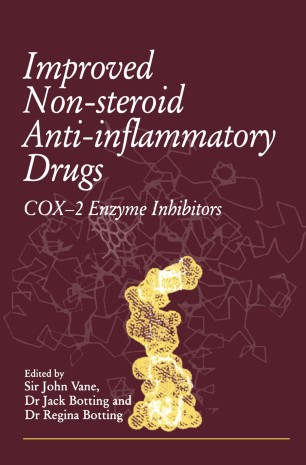 In 1971, Vane proposed that the mechanism of action of the aspirin-like drugs was through their inhibition of prostaglandin biosynthesis. Since then, there has been intense interest in the interaction between this diverse group of inhibitors and the enzyme known as cyclooxygenase (COX). It exists in two isoforms, COX-l and COX-2 (discovered some 5 years ago). Over the last two decades several new drugs have reached the market based on COX-l enzyme screens. Elucidation of the three-dimensional structure of COX-l has provided a new understanding for the actions of COX inhibitors. The constitutive isoform of COX, COX-l has clear physiological functions. Its activation leads, for instance, to the production of prostacyclin which when released by the endothelium is anti-thrombogenic and anti-atherosclerotic, and in the gastric mucosa is cyto­ protective. COX-l also generates prostaglandins in the kidney, where they help to maintain blood flow and promote natriuresis. The inducible isoform, COX-2, was discovered through its activity being increased in a number of cells by pro­ inflammatory stimuli. A year or so later, COX-2 was identified as a distinct isoform encoded by a different gene from COX-I. COX-2 is induced by inflammatory stimuli and by cytokines in migratory and other cells. Thus the anti-inflammatory actions of non-steroid anti-inflammatory drugs (NSAIDs) may be due to the inhibition of COX-2, whereas the unwanted side-effects such as irritation of the stomach lining and toxic effects on the kidney are due to inhibition of the constitutive enzyme, COX-I.