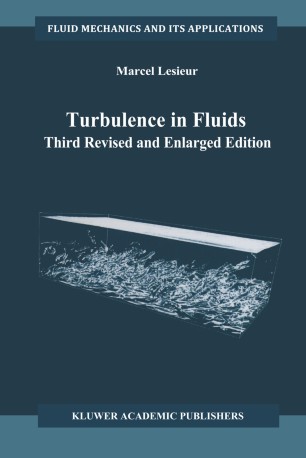 Part of the Fluid Mechanics and Its Applications book series (FMIA, volume 40)

Turbulence is a dangerous topic which is often at the origin of serious fights in the scientific meetings devoted to it since it represents extremely different points of view, all of which have in common their complexity, as well as an inability to solve the problem. It is even difficult to agree on what exactly is the problem to be solved. Extremely schematically, two opposing points of view have been ad­ vocated during these last twenty years: the first one is "statistical", and tries to model the evolution of averaged quantities of the flow. This com­ munity, which has followed the glorious trail of Taylor and Kolmogorov, believes in the phenomenology of cascades, and strongly disputes the possibility of any coherence or order associated to turbulence. On the other bank of the river stands the "coherence among chaos" community, which considers turbulence from a purely deterministic po­ int of view, by studying either the behaviour of dynamical systems, or the stability of flows in various situations. To this community are also associated the experimentalists who seek to identify coherent structures in shear flows.