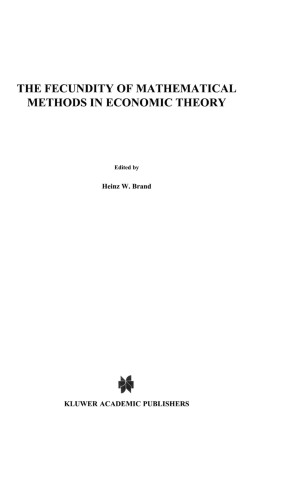 The Fecundity of Mathematical Methods in Economic Theory

The question of how far mathematical methods of reasoning and inves­ tigation are applicable in economic theorising has long been a matter of debate. The first part of this question needing to be answered was whether, outside the range of ordinary statistical methods, such application is in fact possible. In my opinion the controversy on this point has been a fruitful one, which has led, as might have been expected, to an affirmative answer. What, however, has not yet been decided - for the simple reason that hitherto it has not been investigated - is whether the application of mathematical methods to our science is expedient. From the point of view of economic methodology this seems to me the more important part of the question, although the only considerations hitherto brought to bear upon it have been of a rather general character, based on uncer­ tain ideas which have led to uncertain conclusions. That is why I welcome this attempt of Dr. Heinz W. Brand to bring the solution nearer by his present work. The conclusion he reaches here is that mathematical methods cannot unreservedly be employed in our science. The arguments which he carefully weighs, in the course of a criticism which is never destructive, are centred on his own criterion of asking whether it is not merely possible, but at the same time profitable, to apply mathematics in economic science.