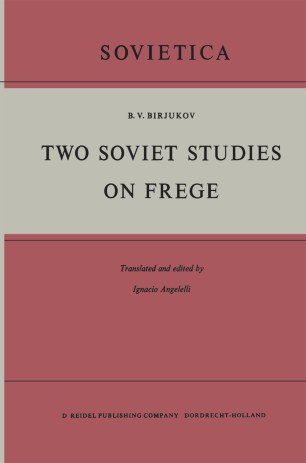 1 The significance of the two papers by B. V. Birjukov on Frege within Soviet studies on logic and its history is indicated by G. 1. Ruzavin and P. V. Tavanec in their article 'Fundamental Periods in the Evolution of Formal Logic' in the collective volume Philo­ 2 sophical Questions of Contemporary Formal Logic. There (page 18) while the organization of "systematic studies on history of logic" is proposed as "one of the fundamental tasks for Marxist logicians", reference is made to a series of recent publications which suggest that such a task is already being accomplished. These are A. S. 3 Axmanov's The Logical Doctrine of Aristotle , v. F. Asmus' 'Criticism of the Bourgeois Idealist Logical Doctrine in the Era of Imperia­ lism'4, in Voprosy Logiki (Logical Questions), P. S. Popov's A 5 History of Modern Logic and B. V. Birjukov's 'G. Frege's Theory of Sense' in the collective work Applications of Logic in Science and 6 Technology. In this book, published by the Academy of Sciences of the USSR, Moscow, in a printing of 10 000 copies, Birjukov's article fills 56 pages. Before this one, however, Birjukov published another study on Frege: 'On Frege's Works on Philosophical Problems of Mathe­ matics' in the collective volume Philosophical Questions of Natural Sciences 7, published in a printing of 8000 copies by the Moscow University Press. This article fills 45 pages.