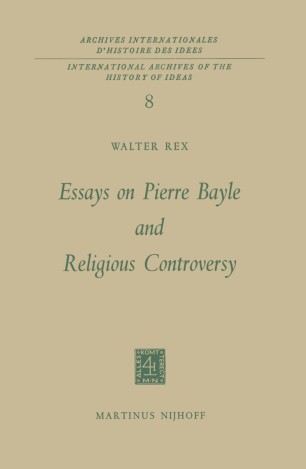 The solitary and erudite figure of Pierre Bayle occupies a position of particular interest in French letters; we are pleased to recognize in his thought the germ of the ideas which reached their fulfillment in the eighteenth century. His own age does not seem to have been quite ready to receive him. Forced into exile by the Catholics, he was censured and harassed by the Protestants in Holland. It is to be expected that his outspoken enemies would have declared him a danger to religion and morality; yet to his more moderate contemporaries, too, he was sometimes a "problem," and one senses an occasional reserve toward him even in his remaining friends. As for the general public, the Nouvelles de la Republique des lettres may indeed have received the "universal applause" Des Maizeaux said it had, yet there was voluminous criticism also. His marvelous Dictionary, which probably achieved the widest circulation of any of his works during his lifetime, also elicited the most attack, censure and discontent. Moreover, though Bayle had earned fame, he did not have in the eyes of his contemporaries­ particularly of those in France - the importance which he has for us today. Other figures seemed still grander than he in the closing decades of the seventeenth century: in philosophy and metaphysics, the e­ normous system of Malebranche, the last significant attempt in France to establish a synthesis of Christianity and reason, attracted far more admiration, or criticism, than Bayle.