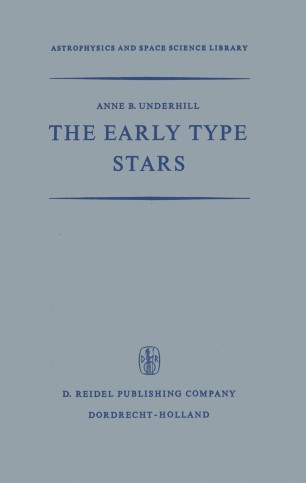 At this time when astronomers are being surprised by the discovery of objects which emit a fabulously large amount of energy, that is the quasi-stellar radio sources and the quasi-stellar galaxies, and when by the means of space vehicles X rays, gamma rays and cosmic rays are being observed to come from the depths of interstellar space, one may ask why write a book about stars. Stars seem to be almost incidental when one looks at the universe in terms of exceedingly great energies. Nevertheless, stars exist. They are accessible to study and they have not yet revealed all their secrets. This is enough to arouse interest and to cause one to try to find answers to the questions which arise. The early type stars are particularly interesting because they are spendthrift stars pouring out their energy at a great rate. But their brilliance is also their undoing. They must evolve rather quickly, on an astrophysical scale. Thus by studying these stars we are studying a population in change. The implications from the local and from the cosmological viewpoint are important if one wishes to understand the details of stellar evolution and of galactic structure. Perhaps one of the simplest reasons for writing a book about the early type stars is to see if some of the conundrums pre­ sented by the spectra of these stars can be unravelled when all the available infor­ mation is brought together.