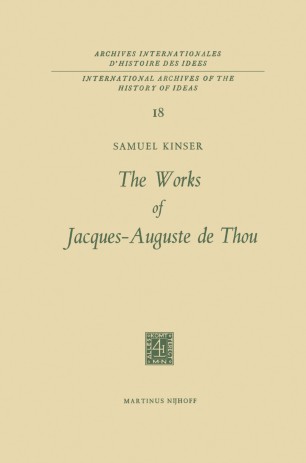 The Works of Jacques-Auguste de Thou

Until the nineteenth century Jacques-Auguste de Thou (1553-1617) was among the most famous and most valued of historians. While his first fame was a succes de scandale - the History of His Time was placed on the Index in 160g - de Thou's work quickly found favor with the humanistically-educated learned class throughout Europe. The esteem in which the History was held transcended religious divisions. The historian received letters of praise from staunchly orthodox Spain and Portugal as well as from heretic England and Germany; through the seventeenth and eighteenth centuries his History was read with enthusi­ asm by certain cardinals at the very curia which condemned it; and so staunch a champion of orthodoxy as Bishop Bossuet did not hesitate to appeal to "such a great author" for support in his own historical works. ! To the philosophe of the Enlightenment de Thou's impartiality in de­ scribing the impassioned times through which he lived and the exact yet eloquent style with which he wrote the History of His Time were familiar touchstones. Voltaire appealed to the "truthful and eloquent de Thou" again and again in his works,2 William Pitt rose in the House of Commons to quote the words of the "great historian of France" during the early years of the French Revolution,3 Lessing 4 and Herder 5 praised him with poetic hyperbole, and Edward Gibbon re­ ferred to "the authority of my masters, the grave Thuanus and the philosophic Hume . . . .