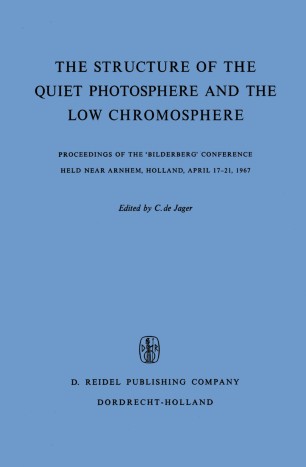 The Structure of the Quiet Photosphere and the Low Chromosphere

Proceedings of the ‘Bilderberg’ Conference Held Near Arnhem, Holland, April 17–21, 1967

From 17 to 21 April 1967 a Study Week was held in the hotel 'De Bilderberg' near Arnhem, Holland, with the purpose to establish a new, and if possible, generally acceptable working model for the quiet parts of the solar photosphere and low chromosphere. The organizers of the conference hoped that even if this latter goal appeared too far to be reached, such a meeting would still be useful, if only for enumerating the crucial problems in solar photospheric research, and for defining future subjects of research. About twenty solar physicists from outside the Netherlands participated in the Study Week, while some others, though prevented from actively attending, sub­ mitted their comments before the meeting. The two above-mentioned goals were reached: a working model could be estab­ lished; yet it became clear that not everyone would agree about this model, and it became obvious too that future research is strongly needed, in particular in the field of line formation (coherence, or non-coherence; local thermal equilibrium), while also the motion field of the photosphere and chromosphere is insufficiently known, and its influence on the formation of spectral lines hardly understood.