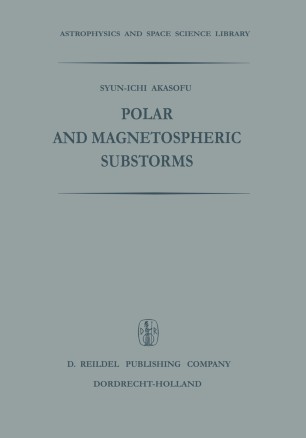 It has become increasingly clear that the magnetosphere becomes intermittently unstable and explosively releases a large amount of energy into the polar upper atmos­ phere. This particular magnetospheric phenomenon is called the magnetospheric sub­ storm. It is manifested as an activity or disturbance ofvarious polar upper atmospheric phenomena, such as intense auroral displays and X-ray bursts. Highly active conditions in the polar upper atmosphere result from a successive occurrence of such an element­ ary activity, the polar substorm, which lasts typically of order one to three hours. The concept of the magnetospheric substorm and its manifestation in the polar upper atmosphere, the polar substorm, has rapidly crystallized during the last few years. We can find a hint of such a concept in the term 'polar elementary storm' introduced by Kristian Birkeland as early as 1908. However, we are greatly indebted to Sydney Chapman, who established the basic foundation of magnetospheric physics and has led researches in this field during the last half century. Indeed, the terms 'polar magnetic substorm' and 'auroral substorm' were first suggested by Sydney Chapman. The concept of the substorm was then soon extended by Neil M. Brice of Cornell University, and Kinsey A. Anderson and his colleagues at the University ofCaliforrlia, Berkeley, who introduced the term 'magnetospheric substorm'. We owe many of these recent developments in magnetospheric physics to the great international enterprise, the International Geophysical Year (IGY) and subse­ quent international cooperative effort (IGC, IQSY).