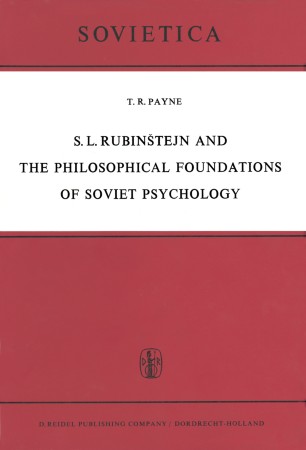 S. L. Rubinštejn and the Philosophical Foundations of Soviet Psychology

This work is intended as an introduction to the study of Soviet psy­ chology. In it we have tried to present the main lines of Soviet psycho­ logical theory, in particular, the philosophical principles on which that theory is founded. There are surprisingly few books in English on Soviet psychology, or, indeed, in any Western European language. The works that exist usually take the form of symposia or are collections of articles translated from Soviet periodicals. The most important of these are Psychology in the Soviet Union (ed. by Brian Simon), Recent Soviet Psychology (ed. by Neil O'Connor) and Soviet Psychology, A Symposium (ed. by Ralf Winn). Raymond Bauer has also edited an interesting symposium entitled Some Views on Soviet Psychology. Only two systematic studies of Soviet psychology have been published to date: Joseph Wortis' Soviet Psychiatry and Raymond Bauer's The New Man in Soviet Psychology. Both are valuable introductions to Soviet psychology; Bauer's book, in particular, gives a good account of the debates on psychological theory in the Soviet Union in the nineteen­ twenties and -thirties. Both, however, are somewhat out of date. There are also a number of interesting articles written by Ivan D. London and Gregory Razran, which give general surveys of particular periods or aspects of Soviet psychology. These have been listed in the bibliography.