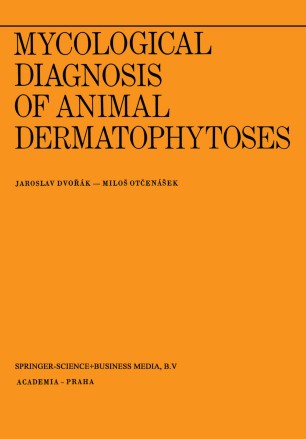 Part of the Czechoslovak Academy of Sciences book series (TPCI)

There are not many biological disciplines, which have experienced such fast development as have human and veterinary mycology in recent years. In the initial stages organisms, whoEe influence on man has not b~en determined, have been investigated on a purely academic basis and with particular reference to their taxonomic position. As recently as the thirties, the pathogenic agents of dermatophytoses were known collectively under such names as "Micro­ sporum" and "Trichophyton". Such designation occurred in most medical and veterinary literature irrespective of the fact that fungi are organisms of a highly complicated and most variable morphological structure, an intricate development and a distribution over a diversity of environments, infecting hosts of the animal kingdom. The greater the credit, therefore, that can be attributed to the pioneers of mycological research, the founders of modern mycology such as R. Sabouraud, M. Langeron, R. Vanbreuseghem, Ch. W. Emmons, who elucidated the importance of mycology in human and veterinary medicine. To one of them, Professor R. V anbreuseghem, this book has been dedicated. In spite of these tremendous efforts, many aspects of the biology and ecology of fungi have still remained obscure in view of the complicated develop­ ment throughout the various phases, the variability of species and the large numbers of purely saprophytic species occurring in nature. At the present, mycoparasitic infection in man and animals is of utmost importance.