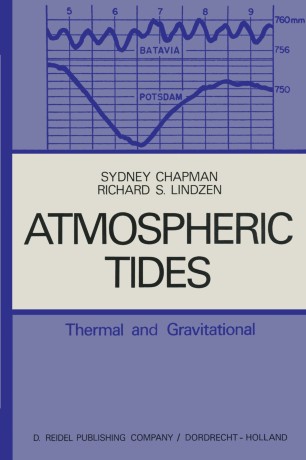 Everyone is familiar with the daily changes of air temperature. The barometer shows that these are accompanied by daily changes of mass distribution of the atmosphere, and consequently with daily motions of the air. In the tropics the daily pressure change is evident on the barographs; in temperate and higher latitudes it is not noticeable, being overwhelmed by cyclonic and anticyclonic pressure variations. There too, however, the daily change can be found by averaging the variations over many days; and the same process suffices to show that there is a still smaller lunar tide in the atmosphere, first sought by Laplace. Throughout nearly two centuries these 'tides', thermal and gravitational, have been extensively discussed in the periodical literature of science, although they are very minor phenomena at ground level. This monograph summarizes our present knowledge and theoretical under­ standing of them. It is more than twenty years since the appearance of the one previous monograph on them - by Wilkes - and nearly a decade since they were last comprehensively reviewed, by Siebert. The intervening years have seen many additions to our know­ ledge of the state of the upper atmosphere, and of the tides there, on the basis of measurements by radio, rockets and satellites.