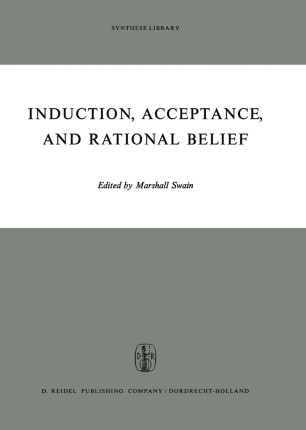 The papers collected in this volume were originally presented at a sym­ posium held at the University of Pennsylvania in December of 1968. Each of the papers has been revised in light of the discussions that took place during this symposium. None of the papers has appeared in print previously. The extensive bibliography that appears at the end of the volume was originally distributed during the symposium and was revised on the basis of many helpful suggestions made by those who participated. The symposium was made possible by a grant from The National Science Foundation and funds contributed by the Philosophy Depart­ ment of the University of Pennsylvania. On behalf of the contributors to this volume, I would like to express my thanks to these organizations for their generous support. In addition, I would like to express my gratitude to the members of the Graduate Philosophy Students Organization at the University of Penn­ sylvania for the considerable assistance they gave me during the sym­ posium. My thanks, also, to Judith Sofranko and Lynn Luckett for their very responsible efforts in the preparation of the manuscript. Finally, I would like to thank Professor James Cornman for his invaluable advice and encouragement.