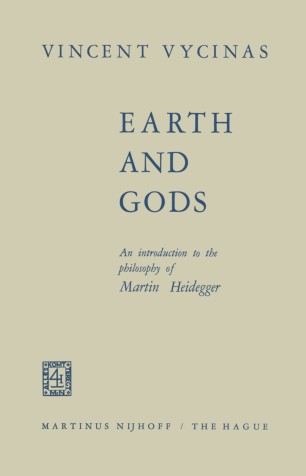 An Introduction to the Philosophy of Martin Heidegger

Earth and Gods is an attempt to introduce the reader to Heidegger's fully developed philosophy. The title Earth and Gods gives an im­ pression of not being a general study of Heidegger's philosophy. However, this is not true - the earth and the gods are fundamental ontological symbols of his fully developed philosophy, namely, his third and final phase of thought. This phase repeats the problems of both preceding phases in a fuller and more developed manner; hence, it implies them. The two preceding phases are the phase of Dasein and the phase of Being. These two phases are a natural flow of fundamental problems which reach their final formation and development in the phase of earth and gods. Dasein (the first phase) leads to Being, and Being (the second phase) bursts into fundamental ontological powers of Being (Seinsmiichte) which are earth and sky, gods and mortals (the third phase). Since earth is unthinkable without sky and since gods are gods in the world of mortals - of men, the title Earth and Gods is an abbreviation of these four fundamental powers of Being. Hence, an investigation of earth and gods is an attempt to present Heidegger's philosophy as a whole. Such a presentation provides the reader with the background necessary for a more adequate and efficient understanding of the writings of Heidegger himself. Thus, Earth and Gods may rightly be considered an introduction to Hei­ degger's philosophy.