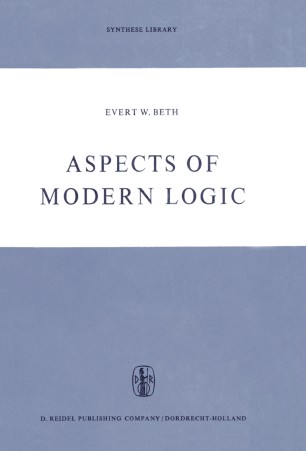 It is common to consider an area of science as a system of real or sup­ posed truths which not only continuously extends itself, but also needs periodical revision and therefore tests the inventive capacity of each generation of scholars anew. It sounds highly implausible that a science at one time would be completed, that at that point within its scope there would be no problems left to solve. Indeed, the solution of a scientific problem inevitably raises new questions, so that our eagerness for knowledge will never find lasting satisfaction. Nevertheless there is one science which seems to form an exception to this rule, formal logic, the theory of rigorous argumentation. It seems to have reached the ideal endpoint of every scientific aspiration already very shortly after its inception; using the work of some predecessors, Aristotle, or so it is at least assumed by many, has brought this branch of science once and for all to a conclusion. Of course this doesn't sound that implausible. We apparently know what rigorous argumentation is; otherwise various sciences, in particular pure mathematics, would be completely impossible. And if we know what rigorous argumentation is, then it cannot be difficult to trace once and for all the rules which govern it. The unique subject of formal logic would therefore entail that this science, in variance with the rule which holds for all other sciences, has been able to reach completion at a certain point in history.