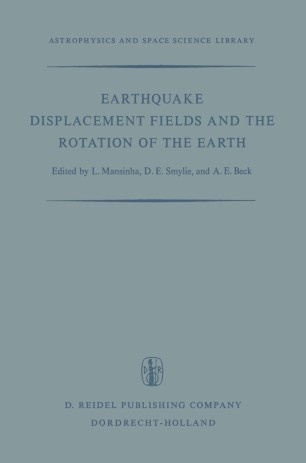 Earthquake Displacement Fields and the Rotation of the Earth

The seeds of this conference were sown with the publication by Press, in 1965, of a paper in which he suggested that the displacement field due to a major earthquake may extend over much greater distances than had been thought possible before. Later on, Mansinha and Smylie pointed out that if Press was correct then, since the redistri­ bution of significant quantities of mass was involved, the inertia tensor of the earth would be altered and thus cause the earth to wobble; this revived the idea that earth­ quakes might be the long sought source for maintaining the Chandler Wobble. They argued that since earthquakes are sudden events it should be worthwhile trying to determine if there was any correlation between sudden changes in the Chandler term of the pole path and major earthquakes. Furthermore, since displacements occur both before and after an earthquake it might be possible to obtain a few days warning of a major earthquake by making instantaneous observations of the pole path. Analysis of the data indicated some correlation but, as often happens in science in general and in geophysics in particular, the results were not conclusive because of imperfect theory and the need for more accurate determinations of the pole position. It soon became clear that a meeting between geophysicists and astronomers involved in this type of work would be of mutual benefit.