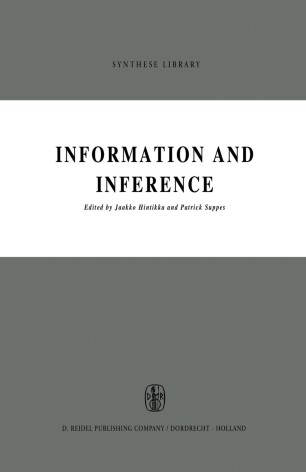 In the last 25 years, the concept of information has played a crucial role in communication theory, so much so that the terms information theory and communication theory are sometimes used almost interchangeably. It seems to us, however, that the notion of information is also destined to render valuable services to the student of induction and probability, of learning and reinforcement, of semantic meaning and deductive inference, as~well as of scientific method in general. The present volume is an attempt to illustrate some of these uses of information concepts. In 'On Semantic Information' Hintikka summarizes some of his and his associates' recent work on information and induction, and comments briefly on its philosophical suggestions. Jamison surveys from the sub­ jectivistic point of view some recent results in 'Bayesian Information Usage'. Rosenkrantz analyzes the information obtained by experimen­ tation from the Bayesian and Neyman-Pearson standpoints, and also from the standpoint of entropy and related concepts. The much-debated principle of total evidence prompts Hilpinen to examine the problem of measuring the information yield of observations in his paper 'On the Information Provided by Observations'. Pietarinen addresses himself to the more general task of evaluating the systematizing ('explanatory') power of hypotheses and theories, a task which quickly leads him to information concepts. Domotor develops a qualitative theory of information and entropy. His paper gives what is probably the first axiomatization of a general qualitative theory of information adequate to guarantee a numerical representation of the standard sort.