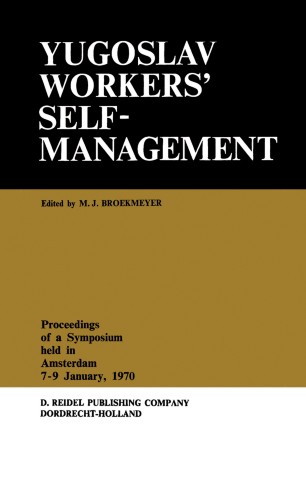 Proceedings of a Symposium Held in Amsterdam, 7–9 January, 1970

This book contains the Proceedings of a Conference held on 7-9 January 1970 in Amsterdam on the problems and perspectives of Yugoslav workers' self management. The Yugoslav writers were selected according to the criteria that they are competent in their field and that they have different viewpoints in their assessment of the system. We hope that the threefold purpose of this book will be attained, namely to provide a clearer insight for the Western reader into the Yugoslav system; secondly to confront Yugoslav society with the ques­ tions asked and the criticism voiced here with regard to the practice of workers' selfmanagement; and, lastly, to pay a modest tribute to the 20th anniversary of Yugoslav workers' self management. To be sure, the range of subjects treated in Amsterdam might seem to be rather wide, but one should bear in mind thaI this was unavoidable in the first large-scale confrontation of two different social systems outside Yugoslavia. Although the language used in this book may not always correspond with the official standards, we trust that the published texts will be easily readable for the benevolent reader.