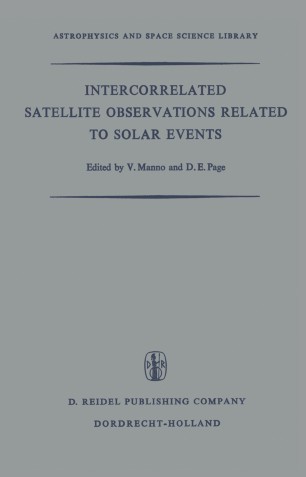 Proceedings of the Third ESLAB/ESRIN Symposium Held in Noordwijk, The Netherlands, September 16–19, 1969

The European Space Research Organisation put its first satellite into orbit in March 1968 and was successful with two more before the end of that year. It was not entirely surprising therefore that the third annual ESLAB/ESRIN Symposium should in some way deal with the results obtained. This book is the Proceedings of that Sym­ posium which, for reasons which Dr. Trendelenburg explains in the introductory talk, concentrated on intercorrelating phenomena occurring during solar events and in particular during the event of 25 February 1969. It is generally acknowledged that space data could yield a much more fruitful harvest if measurements taken simulta­ neously in different regions of space could be compared and the detectors inter­ calibrated. ESRO therefore sought right from the start to encourage this comparison of data. The first two days of the Symposium (16 and 17 September 1969) were devoted to review lectures on inter-related phenomena occurring on the sun, through inter­ planetary space and the magnetosphere right down to the earth's ionosphere. The last two days were used to hear papers presenting results obtained from the ESRO and certain U. S. S. R. and U. S. A. satellites during the solar events around 25 February 1969. The Proceedings published here follow the same sequence as the Symposium presentations. Because of the short time interval between the solar event and the Symposium, some of the data presented in the second part must be regarded as preliminary.