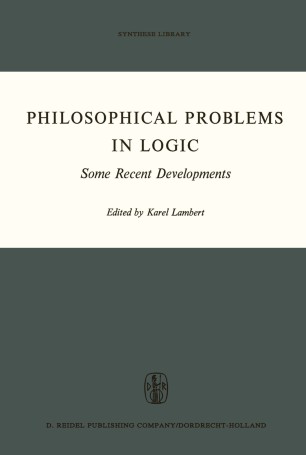 The essays in this volume are based on addresses presented during a colloquium on free logic, modal logic and related areas held at the University of California at Irvine, in May of 1968. With the single exception of Dagfinn F011esdal, whose revised address is included in a recent issue of Synthese honoring W. V. Quine, all of the speakers at the Irvine colloquium are contributors to this volume. Thanks are due to Professor A. I. Melden, Chairman of the Department of Philosophy at Irvine, for his enthusiastic support of the colloquium, and to Drs. Gordon Brittan and Daniel Dennett for their help in the administration of the colloquium. Finally. I should also like to thank Professor Ralph W. Gerard, Dean of the Graduate Division of the University of California at Irvine, for the financial support which made the colloquium possible. KAREL LAMBERT Laguna Beach, California, 1969 TABLE OF CONTENTS PREFACE V KAREL LAMBERT and BAS C. VAN FRAASSEN/ Meaning Relations, Possible Objects, and Possible Worlds 1 JAAKKO HINTIKKA / Existential Presuppositions and Uniqueness Presuppositions 20 RICHMOND H. THOMASON / Some Completeness Results for Modal Predicate Calculi 56 H. LEBLANC and R. K. MEYER / Truth-Value Semantics for the Theory of Types 77 J. M. VICKERS / Probability and Non Standard Logics 102 PETER W. WOODRUFF / Logic and Truth Value Gaps 121 DANA SCOTT / Advice on Modal Logic 143 INDEX OF NAMES 175 KAREL LAMBER T AND BAS C.