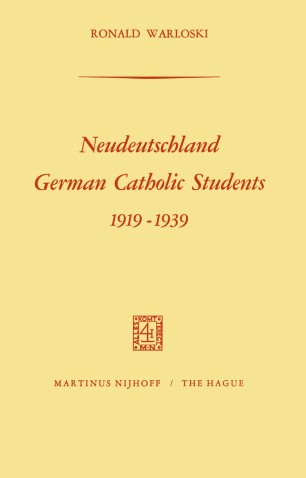 This study is of a modest segment of Germany's experience in the Weimar and Nazi periods. Its purpose is to throw light on one small part of that experience in order to add it to the larger puzzle. It is a study of Neudeutschland, a German Catholic youth organization for students. The membership of the Bund, as it was known, is primarily from the German secondary schools, those which are equivalent to the last two grades of grade school, plus high school and two years of college in the United States. Two ancillary sections of the organization are the Jungvolk, the segment for the youngsters of pre-secondary school age, and the Alterenbund, for those who have graduated and are pur­ suing careers in business, the university, and such. The organization was founded in 1919. Its course was relatively stormy until 1924, after which a short respite occurred in which an attempt was made at a unique synthesis. That synthesis can be sum­ marized in the phrase, "Catholic youth movement. " Neudeutschland sought to catholicize the "healthy" aspects of the German youth move­ ment which had grown after 1900 and which had swept through the secondary schools of Protestant northern Germany prior to the First World War. Mter the war, the impetus towards youth movemen- greatly enhanced by the shattering of the old, restricting authorit- spread among the Catholic students in the secondary schools.