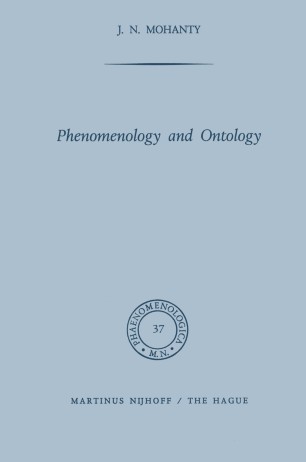 Most of the essays that follow have originally appeared in philosophical journals, Indian and Western. They are reprinted here with the hope that in spite of the wide variety of topics with which they deal there is nevertheless a certain unity of treatment. A few major ideas and distinctions run through all the essays: I need not further single them out here. For permission to reprint, I have to thank the editors of the journals and books in which the essays originally appeared. My former pupil Miss Manjusree Ray has been kind enough to help me in preparing the book for the press. J. N. MOHANTY May, I968, Calcutta CONTENTS Preface v Part One I. Modes of Givenness 3 II. The Given 12 III. Thought and Action 22 IV. Meaning and Truth-I 0 3 V. Meaning and Truth-II 50 VI. Language and Reality 60 VII. On Reference 2 7 VIII. Remarks on the Content Theory 84 IX. Phenomenology and Ontology 2 9 Part Two X. A Note on Modern Nominalism I07 XI. A recent Criticism of the Foundations of Nicolai Hartmann's Ontology II5 XII. Remarks on Nicolai Hartmann's Modal Doctrine 129 XIII. The 'Object' in Edmund Husserl's Phenomenology 138 XIV. Individual Fact and Essence in Edmund Husserl's Philosophy 152 XV. Gilbert Ryle's Criticisms of the Concept of Conscio- ness 163 XVI. On G. E. Moore's Defence of Common sense 170 Part Three XVII.