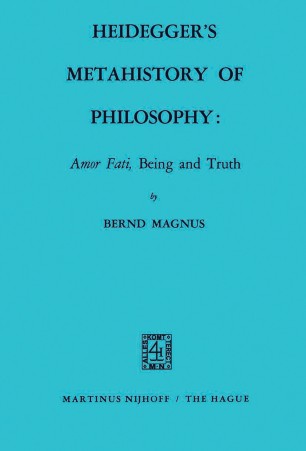 Heidegger’s Metahistory of Philosophy: Amor Fati, Being and Truth

Martin Heidegger's fame and influence are based, for the most part, on his first work, Being and Time. That this was to have been the first half of a larger two-volume project, the second half of which was never completed, is well known. That Heidegger's subsequent writings have been continuous developments of that project, in some sense, is generally acknowledged, although there is considerable disagreement concerning the manner in which his later works stand related to Being and Time. Heidegger scholars are deeply divided over that question. Some maintain that there is a sharp thematic cleavage in Heidegger's thought, so that the later works either refute or, at best, abandon the earlier themes. Others maintain that even to speak of a shift or a "reversal" in Heidegger's thinking is mistaken and argue, in conse­ quence, that his thinking develops entirely consistently. Lastly, there are those who admit a shift in emphasis and themes in his works but introduce a principle of complementarity - the shift is said to repre­ sent a logical development of his thi.nking. Too often the groups re­ semble armed camps.