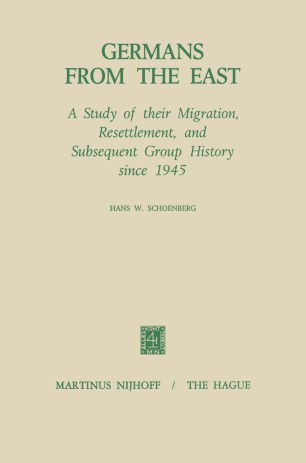 Germans from the East

A Study of Their Migration, Resettlement and Subsequent Group History, Since 1945

Part of the Studies in Social Life book series (SCL)

Who, in 1945 and 1946, could have foreseen that the economic and social integration of the millions of Germans from the East expelled into West Germany after Wodd War II would largely be accomplished in a few years? And, who could have foreseen that many years after this accomplishment the political repercussions of the expulsions would go on? Yet, surprisingly enough, this is what has happened. In 1969, as usual, the major issues of the federal election campaign in West Germany hardly reflect any specific economic and social concerns of the expellees, not even those bruited about by the NPD (N ationaldemokratische Partei Deutschlands). At the same time, how­ ever, all the political parties vying in the campaign, with the exception of the newly founded, less influentialDKP (the new German Commu­ nist Party), pay considerable deference to the political interests of the expellees in the German question. Whether these interests represent the opinion of most of the expellees and whether the expellee associ­ ations in fact speak for many voters is another matter. Why are these questions rarely posed? Why, despite the economic and social integration of the expellees, do the East German Home­ land Provincial Societies - the Landsmannschaften - retain much influence? The explanation of this phenomenon becomes increasingly clear if one reads the intelligent and superbly documented analysis by Hans Schoenberg.