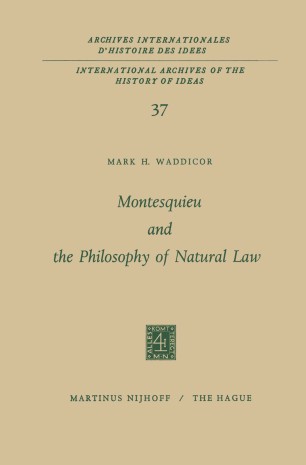 Montesquieu and the Philosophy of Natural Law

In the last hundred years, the philosophy of natural law has suffered a fate that could hardly have been envisaged by the seventeenth and eighteenth century exponents of its universality and eternity: it has become old-fashioned. The positivists and the Marxists were happy to throw eternal moral­ ity out of the window, confident that some magic temporal harmony would eventually follow Progress in by the front door. Their hopes may not have been fully realized, but they did succeed in discrediting natural law. What is often not appreciated is the extent to which we have adopted the tenets of the philosophy they despised, borh in the field of politics, and in the field of personal and social ethics, which Barbeyrac called "la science des mreurs" and which the positivists re­ christened "social science". Consequently, though we live in a world whose freedom, such as it is, is largely a result of the popularization of the philosophy of natural law, and whose conscious and unconscious standards, such as they are, are a result of that philosophy as it became combined with Christianity, the doctrine of natural law is itself for­ gotten. In view of the oblivion into which it has fallen, natural law is a concept which means little to the average reader. All too often, Montesquieu scholars have traded on this oblivion in order to give an exaggerated picture of his originality.