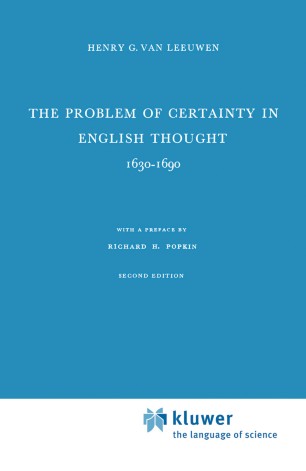 The revival of ancient Greek scepticism in the 16th and 17th centuries was of the greatest importance in changing the intellectual climate in which modern science developed, and in developing the attitude that we now call "The scientific outlook". Many streams of thought came together contributing to various facets of this crucial development. One of the most fascinating of these is that of "constructive scepticism", the history of one of whose forms is traced in this study by Prof. Van Leeuwen. The sceptical crisis that arose during the Renaissance and Refor­ mation challenged the fundamental principles of the many areas of man's intellectual world, in philosophy, theology, humane and moral studies, and the sciences. The devastating weapons of classical scep­ ticism were employed to undermine man's confidence in his ability to discover truth in any area whatsoever by use of the human faculties of the senses and reason. These sceptics indicated that there was no area in which human beings could gain any certain knowledge, and that the effort to do so was fruitless, vain, presumptuous, and perhaps even blasphemous. StaI'ting with the writings of Hen ric us Cornelius Agrippa von Nettesheim (1486-1535) and Michel de Montaigne (1533-92), a thoroughly destructive sceptical movement developed, attacking both the old and the new science, philosophy and theology, and insisting that true and certain knowledge can only be gained by Revelation.